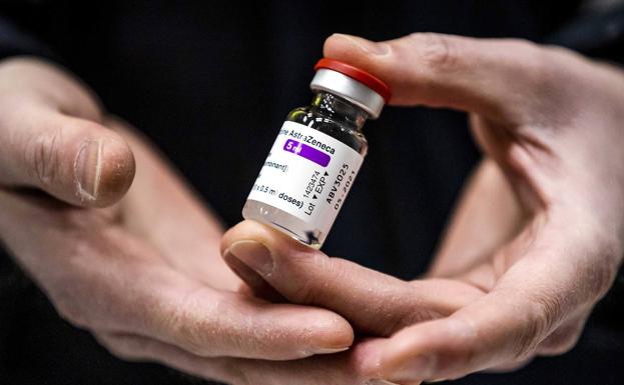 The detection of 11 cases of a very rare type of thrombosis in the EU precipitates the decision to temporarily suspend AstraZeneca vaccinations against COVID-19, which was also taken by Germany, France, and Italy.

After Denmark, Norway, Iceland, Holland, and Ireland discontinued administration of the AstraZeneca vaccine after detecting several cases of blood clots in people vaccinated with AstraZeneca, Spain, Germany, France, and Italy have joined this suspension of immunizations with the AstraZeneca company vaccine on Monday until the European Medicines Agency (EMA) clarifies whether or not the drug is related to detected thrombotic episodes.

The decision was also adopted on Tuesday by Sweden, Portugal, Slovenia, Latvia, and Cyprus. For now, the EMA will keep the investigation open and will issue a verdict on Thursday, although it insists that the benefits of the vaccine continue to outweigh its risks.

The alert of several cases of blood clots in recently vaccinated people of a very rare type of thrombosis in Europe led to the halting of using AstraZeneca-s vaccine in Spain, which was until now an advocate of continuing immunization with AstraZeneca despite the pause in Denmark and Norway. The weekend changed the risk assessment as more cases of thrombosis emerged.

Why is it no longer administered?

Austria gave the first warning sign last Tuesday when the administration of a batch of AstraZeneca was suspended on suspicion that it could have caused a pulmonary embolism on one person and the death of another diagnosed with multiple thromboses. Two days later, Denmark went a step further and stopped all vaccinations of AstraZeneca. And after that, the addition of countries that have decided to stop has not ceased.

The EMA and the World Health Organization (WHO) insisted that there were very few cases, and the causal link was not proven. In fact, as of 10 March, only 30 cases of thromboembolic episodes had been reported after nearly five million doses were administered in the EU, the EMA claimed. Spain supported the dialogue, but the detection of such specific and rare cases of thrombosis gave a twist to its risk assessment.

“There are very few cases, but because of the qualitative importance of each of them and as in the general population there are also very few cases of bleeding disorders, we find it prudent to stop,” Minister Carolina Darias said Monday. According to the Ministry of Health, among the six million doses administered in the European Union, 11 cases of this type of cerebral venous thrombosis have been detected. Darias said vaccination would stop for two weeks, pending a decision by the EMA Pharmacovigilance Risk Assessment Committee scheduled for Thursday. The minister has not concreted whether the stop will have an impact on vaccination targets — anticipating by the end of the summer, 70% of the population will be vaccinated, or on people who have already received the first dose of AstraZeneca. “There is time,” said Darias, to arrange the administration of the second dose if there is a favorable resolution of the EMA, as the period between injections can be up to 12 weeks.

The minister called for calm and insisted that, for now, the link between the vaccine and thrombus is “temporary,” not causal. In Spain, where last week five autonomous communities cautiously set aside part of one of the batches of vaccines investigated, 939,534 doses of AstraZeneca had already been administered.

As in Spain, prudence has hastened more European countries’ decision to stop vaccinating with AstraZeneca. “On the recommendation of the Minister of Health, and in cooperation with the French health authorities, the decision was taken, in accordance with our European policy, to suspend, as a precaution, vaccination with AstraZeneca, hoping to resume it quickly depending on the opinion of the European Medicines Agency,” French President Emmanuel Macron said on Monday. German Health Minister Jens Spahn, for his part, has assured that deciding to stop vaccinating with AstraZeneca “has not been easy.” “It is a purely preventive measure” that will allow experts to review incidents carefully, Spahn said.

The Italian Drug Administration (IDA) also announced that it joins the decision after two people who had received the vaccine died in Sicily. However, these cases are still being investigated. The country’s Ministry of Health has explained: “there is currently no direct correlation with reported deaths”.

Faced with the situation, the EMA Pharmacovigilance Risk Assessment Committee, the body responsible for monitoring the safety of medicines already approved, meets on Tuesday to continue the investigation and assembled in a meeting on Thursday to find appropriate conclusions with the information received.

“The number of thromboembolic events in general in vaccinated people does not appear to be higher than that observed in the general population,” the EMA insisted on Monday in a statement. Like WHO, the European body maintains the view that the benefits of the vaccine outweigh the risks of side effects. “Rates of thrombosis among vaccinated people are lower even than among the general population. No drug is 100% safe, but the benefits of vaccinating the population against a disease we know is killing millions of people worldwide must be taken into account,” said Soumya Swaminathan, a WHO Chief Scientist.