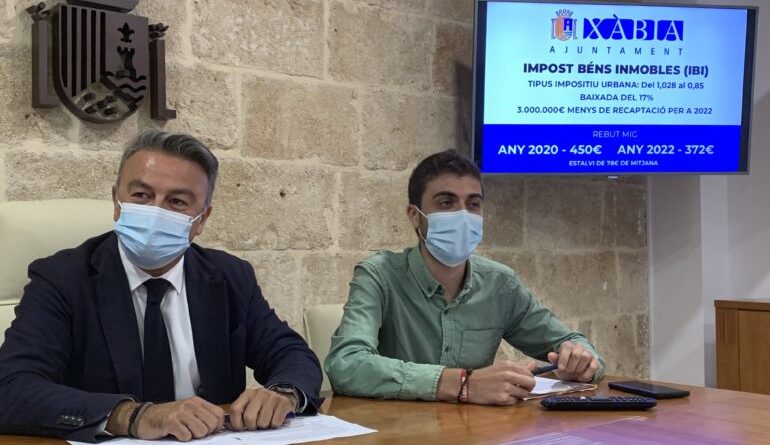 The councilor for the treasury, Ximo Segarra, accompanied by the mayor of Javea, José Chulvi, has announced the decrease of the Property Tax in Javea next year. The IBI (Impuesto de Bienes Inmuebles) is to be reduced by 17%, from the current 1.028 to 0.85. This reduction will mean a saving of 78 euros on average per home, lowering the average charge from 450 euros (in 2020) to 372 euros in (2022). José Chulvi claimed a “great effort has been made” by the town hall¡s treas­ury depart­ment, to facilitate the ‘largest reduc­tion in IBI in recent times.

With this modification of the tax mandate, Javea town hall will collect around 3 million euros less. The Councilor for the Treasury has also mentioned further bonuses for large families (a 50% reduction) and up to 25% for three years (with a limit of 200 euros per year) for residential buildings that have installed solar systems.

Segarra added the decrease in IBI is possible thanks to the current “favorable economic situation” of the municipal coffers.

For his part, the mayor stated that this fiscal modification is one more step to help the economic recovery of families caused by the pandemic. Chulvi outlined that “this tax cut does not mean the loss of any service and investment; we are going to continue providing the same services.” In fact, the rubbish removal rate remains the same, at 125 euros per home.

The tax on mechanical traction vehicles is also to be modified. The bonuses are aimed at eco-friendly vehicles, with electric car owners enjoying a discount of 75% and hybrid vehicle owners 50%.

Furthermore, the councilor of the treasury has indicated that there is a change in the technical terminology of capital gains to adapt to the new state regulations. Likewise, Javea Town Hall will also facilitate an installment payment system for residents who have debt with the council. Debts will be allowed to be paid over a period of up to 24 months, up to a maximum of 12,000 euros.

Other town halls in the Alic­ante province, including Benidorm, have also announced reduc­tions to IBI prop­erty tax for res­id­ents. In Ben­idorm, the town hall IBI rate is reduced by 0.12 to 0.670. Treas­ury coun­cil­lor Aida García Mayor said the cut is possible due to “con­trolling spend­ing”.