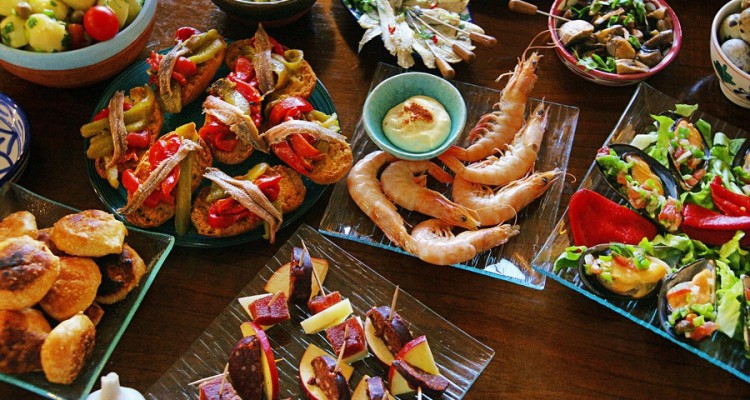 The traditional paella pan has a flat bottom and is only an inch or two deep.

Valencian cooking uses many possible ingredients, but a smaller core set will allow even beginners to produce authentic Valencian dishes.

Valencia’s cuisine is unique. Melding the traditions of Northern and Southern Europe, Basque cooking with elements of Islamic cuisine, then adding a layer of complex New World ingredients, Valencia has ended up with a diverse, flexible, and thrilling cuisine. The basics, however, are simple.

The Valencian pantry beings with a bottle of olive oil. Extra Virgin is common, but olive oil is so essential to the region’s food that Valencia’s native cooks can treat all the varieties of olive oil as part of the palette. Begin with a reliably good, full flavored olive oil you can afford to purchase in large volume.

Follow with the great triad of garlic, onions, and peppers. A range of peppers are used, from the bell to spicier versions, but the most vital and distinctive pepper is used dry and powdered as paprika. This seasoning, different from cayenne or chili powder, can be sweet or hot, smoked or not, but it is unmistakably Valencian and tastes like no other chili preparation.

Add in the incredibly varied staples of a Valencian kitchen. Basics include French-style baguette loaves of bread, cornmeal for baking, and dried pulses. Potatoes and rice are of particular interest as they were imported into the cuisine. Potatoes come from the Americas. Rice, native to Asia, became a common ingredient during the period of Islamic rule and never left even after Valencia’s monarchy took the nation back. Rice in Islamic-style pilafs and the famous paella are almost totemic Valencian foods.

Stock your pantry with oregano, rosemary, and thyme, fresh if possible. Be sure also to buy plenty of flat-leaf parsley: the bountiful use of the green is another remainder of Islamic cooking. Again, be sure to get paprika and consider investing in several varieties for the sake of exploration. Saffron, while costly, is vital to many Valencian dishes and is worth the expense. Anchovies, caper berries, and olives provide salty seasoning notes to many dishes. Sherry vinegar is a simple saucing agent in lots of recipes. Lemons, limes, orange blossom, rose water, vanilla, and cinnamon are also dear to the heart of the Valencian cook.

There is little need for special tools however a paella pan with which to cook the classic rice dish is very useful, and a range of covered casseroles and deep olla or earthenware pots are helpful for traditional Valencian rice and potato-based stews.