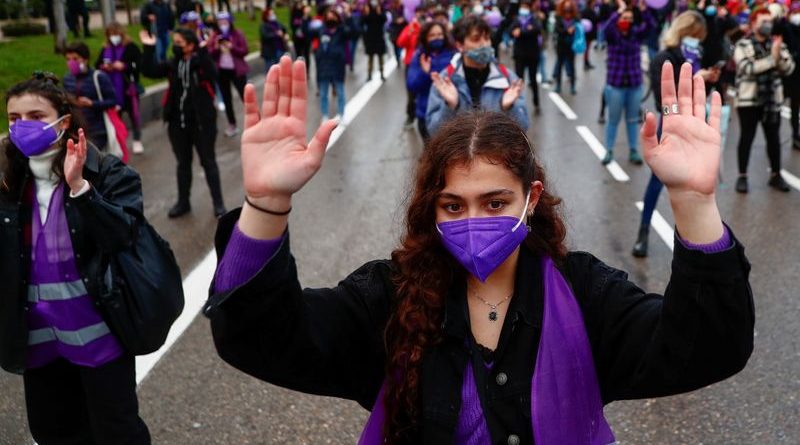 In Madrid, the courts forbade even small-scale demonstrations, despite there being more reasons than ever for protests, including:

According to the organisation Dones Lleida, hundreds of women filled the streets of Lleida on Monday to claim their rights on International Women’s Day, arranged by the association. As per their social media, the reason for their struggle is to combat the “criminal alliance of patriarchy and capital”, as well as to demand “the right to abortion in Lleida”.

The closure of Foreigners Internment Centres (Centro de Internamiento de Extranjeros, CIE), the withdrawal of the gag law, violations of rights to temporary workers, and a reception centre for abused women, are other issues. The women’s entourage walked through several main roads in Lleida until the government’s sub-delegation arrived, when they lit a small bonfire.

Some 4,500 people, according to the Barcelona Urban Guard, occupied the Paseo de Gracia in the Catalan capital on a quiet Women’s Day marked by COVID-19, which forced the usual walking manifestation of 8 million to be replaced by several static groups to reduce the risk of contagion.

Under the slogan “Together, diverse and rebellious, we are unstoppable”, the meeting began at around 6.30 am on the Paseo de Gracia. The crows chanted “I do not stay at home” against tough government measures enforced due to the pandemic.

The Vaga Feminista collective, which organised the event, had prepared for a static demonstration with safety distancing in place, consisting of eight sections, with capacity for about 450 people in each, from Gran Via de les Corts Catalanes, to Avenida Diagonal.

The mayor of Barcelona, Ada Colau, said on Monday that “the feminist wave is unstoppable” and defended the mobilisations on March 8 in the face of the “far-right campaign” against the feminist movement. She announced: “The streets are ours, they will not get to scare us or criminalise us”.

After fears bought on by the demonstration on Women’s Day when 8M gathered in Barcelona, Colau emphasised that for this year’s meeting, “all safety measures, fixed by the health authorities”, such as masks, distance, and previous registration, were met. According to Colau, “more than ever we must continue to occupy the street” in front of “an extreme right that tries to “criminalise the feminist movement with an unacceptable campaign. What we are not going to do under any circumstances is to stop declaring ourselves,” stressed the mayor, who said, “The streets are ours; no one is going to get us off the streets.”

JxCat’s (Junts per Catalunya) candidate for the presidency of the Generalitat, Laura Borrs, asked on Monday that International Women’s Day serve to communicate to the population “the situation of lack of social justice that feminism denounces”. In statements to the media before the feminist demonstration in Barcelona, Borrs said “a lot of work is needed because there is a situation of equity, which is an indicator of democratic quality”. The leader has called for “being stronger than ever” to make feminist policies in light of the rise of parties that she says ignore violence against women, alluding to right wing party Vox, and has been in support of a parity government.

The International Federation of Journalists (FIP) launched a global campaign for International Women’s Day, calling on the media to take action to end the gender pay gap. The #PayMeEqual campaign calls for the press to conduct payment audits in their agencies and calls for journalists to participate in an extensive global survey to draw attention to the situation.

The FIP has pointed out that journalism is no exception to this pay gap, which is estimated at 23%, and recalled the case of BBC presenter Samira Ahmed. Ahmed won a demand to the network demanding a higher salary, as she earned six times less than her male colleague.